Agriculture contributes upto 51% employment and 15% of the Gross Domestic Product. India has the largest are under cultivation and produces the second largest quantum of produce exporting upto USD 38B to 120 countries.

India is planning to bolster its econmic prescence in Russia’s Far East.

India is collaborating with many countries to generate 450 gigawatts(GW) of renewable energy by 2030.

Ancient dynasties also built extensive agricultural infrastructure to store rain and river water in tanks and dams; channels to carry water to agricultural fields; canals to allow water-based transport of produce; and docks to facilitate the export of agriculture produce. Many of such infrastructure (documented in stories, epigraphy, foreign visitor travelogues, sculpture, and paintings) are still in use in various parts of India. Sugar was grown mostly in India till about the 18th century. The British transferred this technology and indentured labour to many other parts of the world such as Africa, the Caribbean Islands, and even the Pacific. However, they also systematically dismantled agricultural industries and got farmers to produce goods that they would tax and buy at highly controlled low prices so that they can process them in their own facilities and maximise profit. British records themselves say that such practices manufactured large scale famines in India resulting in the death of millions of people. 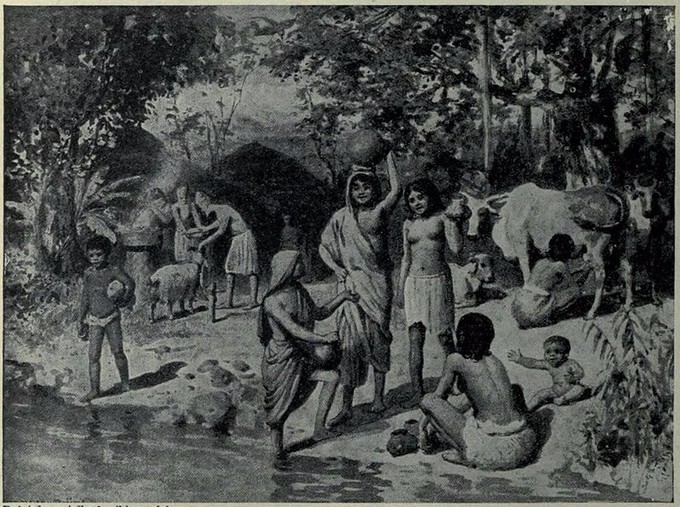 Agriculture flourished in the Indus-Valley Civilisation in 5000BCE The Kallanai Dam in Thanjavur, Tamizh Nadu, was built 2000 years ago 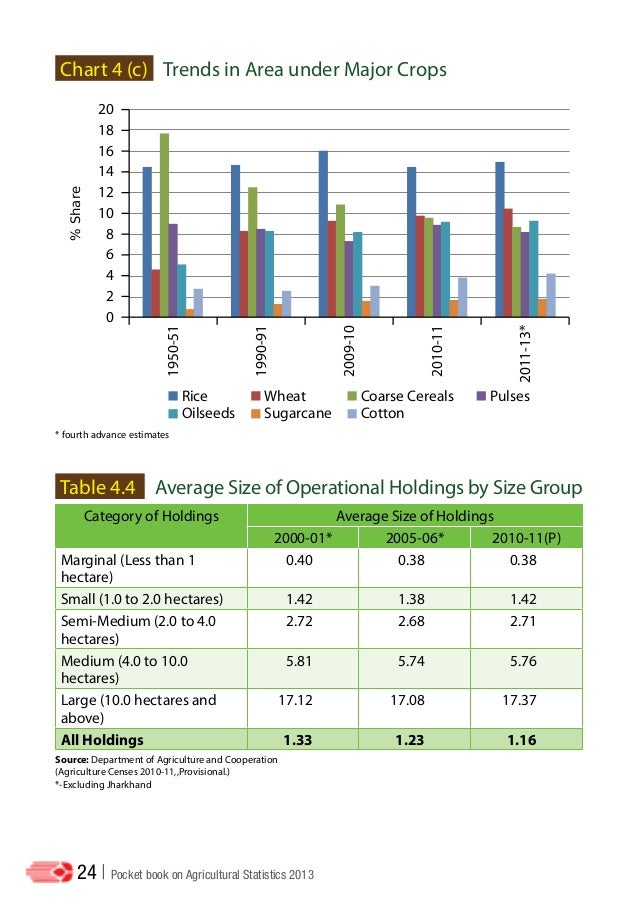 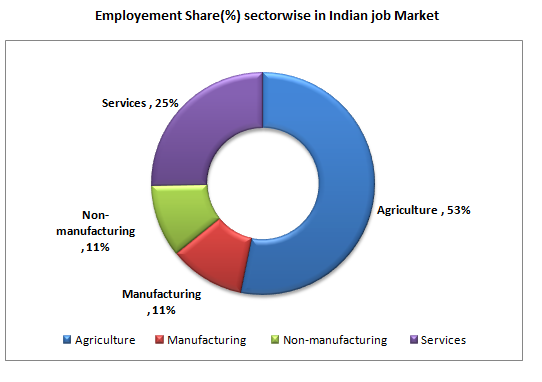 Employment percentage by sector of the Indian economy
Sponsored by:

At the time of independence in 1947, the British left India an economic and social basket case. Since then, agriculture has seen a green revolution (food), a white revolution (milk), a yellow revolution (edible oilseed), and a blue revolution (aquaculture). Now, agriculture and allied sectors is an important component of the Indian economy both in terms of contribution (15% of GDP in 2020) and number of people working in this sector (51.5% in 2020). However, with the widespread growth of the economy, agriculture’s percentage is declining steadily. India produces the second largest quantum of agriculture produce but largest under cultivation exporting more than USD38B (2013) to 120 countries (more than double the agricultural exports of the European Union) making it the seventh largest exporter of agriculture produce.

While the sector is performing well, supporting infrastructure such as storage, roads, access to markets, fair financing, and customer access remained a problem for 70 years. However, major agricultural reforms have been initiated after 2014 to bring down many of these issues. With the advent of pervasive Internet, several agriculture aggregation companies have empowered farmers to sell their products directly to end customers. However, bad politics, local corruption, and non-uniform infrastructure at the state level continues to keep millions of farmers below the poverty line. Also, extensive use of chemical fertiliser and pesticides in states like Punjab has increased per hectare yield but also reduced profitability as cost of inputs due to increased usage requirements continue to grow year on year. Sikkim became the first Indian state to become 100% organic in 2016 and there is a silent revolution where wealthy and more aware customers are demanding non-chemical produce.

Because of colonial and historical reasons, land holdings in India are rather small making them non-conducive to economic scaling. Further, archaic British laws also limit the capacity of a farmer to exit or a non-farmer to enter the sector. Post-independence socialist-based Nehruvian policy also limited a farmer’s right to sell outside his state. Top-down Soviet-style policies created many dams resulting in the drying up of rivers, starving local storage tanks, and dis-using agricultural channels, making India a water-starved nation and reduced the Indian farmer to depend on rain for his crops to succeed. Climate change caused by pollution from domestic and international sources have changed wind, rainfall, and weather patterns. 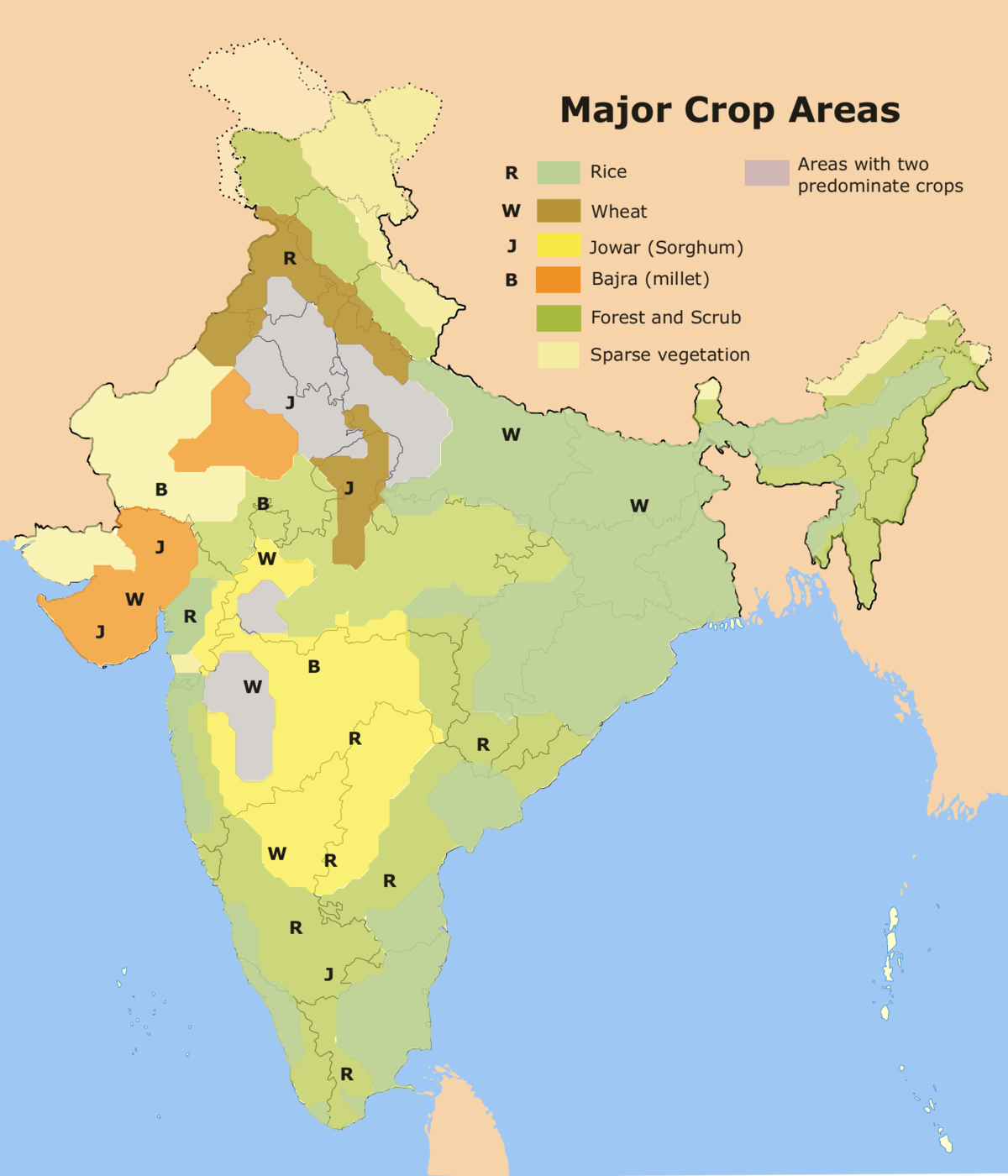 Many positives for agriculture
Sponsored by:

While technology has brought television and the Internet to every village, it has also provoked an aspiration to own all things modern. Sometimes, this has led to farmers borrowing heavily to own modern amenities, conduct a marriage, organise a death ceremony, or pay for the medical bills of a loved one. This leads them into a debt trap they cannot escape. Local politicians have encouraged such behaviour by forgiving loans and providing relief for every environmental incident leading to the weakening of banking and financial infrastructure. At times, some farmers in extreme debt commit suicide.

Contemporary policies aim to overcome these shortcomings through direct deposit programme of assistance and therefore eliminating man-in-the-middle corruption, advance intelligence on what crops will produce profit, fair minimum support price if sold to governments but also allowing private buyers to offer higher prices, attractive financing schemes, improving local storage mechanisms, revitalising ancient water channels, and decoupling the government from the control it has over agriculture. This has led to protest by those who profiteer on such inefficiencies and team up with subversive elements. However, recent elections and peoples’ reaction across the country have clearly shown that such reforms are desired by farmers.

Agriculture contributes upto 51% employment and 15% of the Gross Domestic Product. India has the largest are under cultivation and produces the second largest quantum of produce exporting upto USD 38B to 120 countries.